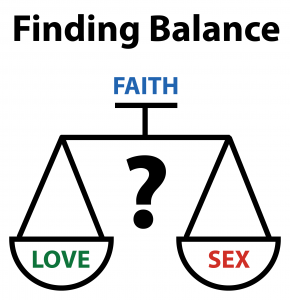 Balancing the roles of sex, intimacy and faith in love relationships can be challenging. The ratings you provide are meant to help you better understand the complex dynamics of your current situation. Is it time to take action on an issue or make a decision? I hope this information will benefit you and your relationship!

First, remind yourself of your relationship context. The issues of sex and intimacy can feel different depending on your current relationship status, your gender and your age: END_OF_DOCUMENT_TOKEN_TO_BE_REPLACED

END_OF_DOCUMENT_TOKEN_TO_BE_REPLACED

Since 1999 as a professional addictions counselor, I’ve encountered hundreds of miserable people trapped in destructive habits. While the initial goal of treatment aims to help the individual sever their dependence on the specific substance (alcohol, painkillers) or behavior (gambling, pornography), it’s their beliefs and self-talk which invariably intensify their misery.

I often use my greatest tool to help rescue these sufferers. What is it?

Say hello to Positive Psychology (the science of happiness), and its founder, Martin Seligman. You can be sure more about this will follow in future posts.

In order to “reconcile the square of sex with the circle of spirit,” Peng writes, it is necessary to “identify the fundamental, seemingly irreconcilable differences between male and female sexuality.” Then he goes on to clearly explain understandable ways to unify those differences that makes inherent sense (information a person has always known but never put into words).

Click to read his article and find out for yourself. Are you as enlightened (and convinced) as I a

Sexless doesn’t mean “less sex” in the world of my readers, it means “no sex—period.”

Recently I read about a married couple in their mid-30s who had sex “six or so times in the past year,” and the writer made clear, “we’re perfectly happy.” The writer, an anonymous wife who stated her views in redbookmag.com’s article, “Why I’m Happier in a Sexless Marriage,” said her husband’s and her own level of desire are equally matched.

I think that’s great. It’s healthy for her to go public owning that both spouses are sex-satisfied, and I am genuinely glad she is pleased that their degree of attraction and arousal are balanced. “We’re both on the same wave length in terms of how much importance we place on our sex lives.” She then cites the crux of the dilemma for many “no sex” couples, “I believe that problems arise when couples have wildly different sexual needs.”

Bingo. It’s the “wildly different” part that peeves rejected spouses and guilt-trips the disinterested spouse. There’s a common understanding out there in folks’ minds that sex a few times a year means “sexless,” which, of course, is the notion she is speaking about.

But she goes on to say it would be something else altogether “if we suddenly stopped having sex.” Ah, there’s the rub! As with thousands of “no sex,” long-term committed relationships (chronic and persistent rather than infrequent and intermittent) many of the positive factors she names are missing in the love lives of no-sex couples:

Relationship factors like these are the mark of a healthy union and evidence of solid, two-way communication—hardly descriptors typical of “no sex” couples’ relationships. The forums and blogs which readers of All of Me Wants All of You visit contain a dearth of such essential traits, and that’s why the fictional couple in my novel, Dean and Kate, strive to resurrect their stale and listless love life to new heights of vulnerability, trust, and sensual passion—even to discovering a sacred connection.

How do you rate your relationship? Sex-satisfied? Less sex? No sex? . . . Sound off!