All of Me Wants All of You: An Edgy Christian Love Story 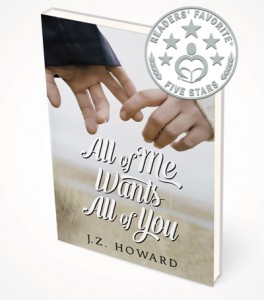 Stuck in a stale, sexless marriage, DEAN NELSON, a husband and father of two, meets an attractive single woman while discussing her son’s work behavior at his company. Dean and LARISSA BEAUMONT find each other irresistible, and begin meeting alone. At home, Dean’s wife KATE NELSON is supermom to two teenage daughters, a busy volunteer at church, and totally tuned out to the love life that Dean desires. The budding infatuation between Larissa and Dean intensifies until he ends it because his conscience reawakens his vow of faithfulness to Kate and their marriage. This near-affair redoubles the struggles for Dean and Kate, both Christians. Dean tries to rejuvenate their dying intimacy, which Kate denies she’s had a starring role in creating. Jilted and hurt, Larissa faces loneliness and self-doubts from Dean’s rejection and from life’s wounds in her past — the fallout from poor foster care in her childhood which has alienated her spirituality. Now, as an adult whose resilience and optimism define her, she wonders: Will I ever meet the right man, the life mate I’ve longed for? 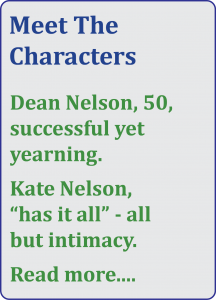 Kate confronts Larissa, the “other” woman, and rather than despise her she discovers why Dean found her sexy: Larissa has innate sex appeal that Kate does not, and unlike Kate, is comfortable in her body. Dropping her attack, Kate asks for her help. Larissa sees a woman in pain and agrees to “coach” her in the feminine arts, starting from the inside out (trust vs. shame, vulnerability vs. inhibition, pleasure vs. hyper-modesty). As Kate sets out on a new course, her renewed commitment to Dean fuels her determination to experience God’s vision for satisfying, pleasurable sexual intimacy. For Larissa, the possible answer to her greatest wish emerges when she meets Dean and Kate’s charismatic friend, TREVOR  HARRINGTON, a single pastor whose acquiescence to remain a bachelor for life gets flipped upside down. Not only are he and Larissa a match, but Trevor holds the key to Larissa’s making peace with her troubled past, as well as encouraging her son’s maturity after 18 fatherless years. Responding to the damaging isolation and frustrations at home, Dean moves to a motel and explores his options, including divorce, while remaining faithful. One day while searching for solutions on the Internet, he is shocked to learn that he is among 50,000+ spouses like him, men and women lacking intimacy with their spouses and desperate to experience healthy, godly sex Lives.

As Kate’s and Larissa’s bond revolutionizes both their lives, Kate encounters inner challenges to her growth as a woman who strives for an ignited libido largely because of sex-is-dirty-and-sinful warnings spread by the church. She also confronts numerous cultural distortions about sexuality. Due to the emotional distance between them, Dean remains unaware of her strides despite Kate’s growing willingness to meet her own and his needs and desires. When Kate’s parents arrive for a Christmas visit, tensions erupt as she faces down each parent, liberating herself from the dysfunctional ways she was raised. Meanwhile, Larissa and Trevor face a major hurdle in accepting each other. While he’s an eligible Mr. Right on one level, she is skeptical about his career as a lifelong missionary who is sold out to God and thinks his vocation, bluntly put, is a nonstarter. In Dean and Kate’s effort to forge a new love life, Kate struggles to free herself from the inner barriers trapping her, and succeeds — lifting Dean’s despair, uniting them in a common purpose, and opening their souls to what marriage really means. Seeing past their differences, Trevor risks proposing to Larissa and she risks accepting his offer. God’s power and grace nurture the four individuals as their yearnings to live to the fullest become reality, and love prevails as the two couples find their passionate hearts as lovers.

CERTAIN CONTENT THAT APPEARS ON THIS SITE COMES FROM AMAZON SERVICES LLC. THIS CONTENT IS PROVIDED 'AS IS' AND IS SUBJECT TO CHANGE OR REMOVAL AT ANY TIME.

PS: Be SURE to read all the way through Chapter 3. That's where the Edgy starts to happen!

Download: the PDF by clicking HERE. or on the image below.

What readers are saying

"This story is AWESOME! I love that it dealt with real issues and I'm glad the author did not shy away from these issues. So often the church wants to hide, but we should not; this story lets us know that hiding is not an option, if we hide we can't be made whole and we may even perish..." Deborah Dunson

"I must admit I was skeptical and a little uncomfortable at the blunt and open sexual language in the first few chapters. The further I read, though, the more convinced I became that this kind of discussion is badly needed in Christian circles. I do not remember the last time, if ever, that I've bookmarked ten different spots in a fiction book. " Deb Haggerty, Positive Grace

This screenplay chronicles CORA WYLIE's struggles to raise her large family during the Great Depression on Minnesota's Iron Range. Cora's childrearing is complicated by her hard-drinking husband, JESSE, whose freewheeling job as a lumberjack is cut short in 1934 due to widespread economic turmoil. Their survival as a family is constantly tested by daily hardships, poverty wages, and harsh winters. Despite this hardscrabble existence, Cora keeps investing in her children, imparting her values, morals, faith, and good humor.